Last day in Frankfurt, off to Wien!

Today was my last day at Beröa. Once again I thought of going out to the city, but I ended up canceling that plan. My flight was at 5:30 and I wanted to make sure that I got there on time. Since I might not know the bus system, I didn’t want to take my changces of getting too lost. So in the morning I cleaned up my things. It actually took longer than I thought. By the time I had cleaned my room, eaten breakfast, gone online to check on flights and where to go when I landed (since the airports didn’t have wifi), and packed my things, it was just about time to leave. I was hoping to get to say goodbye to people, but I guess no one’s really around on Saturdays. I checked the rooms, but there was no one here. I wrote a few thank you letters and put the money in their mailbox with my key. I took a few pictures and I walked out the door.

I went over to the train station and tried to figure out how to pay. There was an English version of the instructions, but it was still confusing! I ended up accidentally purchasing the wrong one, but I figured it would be ok because they don’t really check and I tried to buy it, but their instructions were just too confusing! Then I hopped on the train. I figured I could hop off at the main station and look around Frankfurt’s innercity before going to the airport and pick up some lunch there. Unfortunately I misheard the stop and got off too early again. Oh well. So for half an hour I wandered the streets of this other station… whose name I cannot remember. I went to a little konditorei (like a sweets bakery/ café) and bought this delicious pudding roll thing. I bought two for a pretty good price. Then I hopped back onto the train and was shuttled off to the airport. 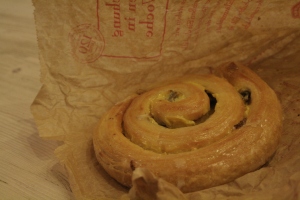 The Frankfurt airport was quite amazing. Really… the LAX airport is the worst! The check-in is a lot faster and easier. They didn’t have me take my shoes off or anything. I was quite surprised.

I was also surprised to see a group of protestors near the entrance of the airport. Scared me! For a minute I thought I wouldn’t get to go to Wien (Deutsch for Vienna). Luckily though my flight and my pathway was not effected. So then I decided to explore the airport since I was early enough that my gate was still preparing for a different flight. I walked to the end of the hall (they had many many gates) and then I took the people movers back. I really like people movers, they’re very fun. The ones here are extra fun because they’re a little raised so you can ride it going up and then have a fun time coming back down as well.

The actual flight was on a very small plane since most people take trains versus planes when traveling around the area. It was the second time that I’ve been bussed out to a plane and then get to climb the stairs directly into a plane.

When I got into Wien it was already 20:30 (yeeaaa, military time is used here so I changed my phone time to reflect this and adjust to the way that time is normally read). I walked over to the CAT to take me to central city where I would be able to take the U-Bahn (meaning underground train) to the hotel. The CAT is very comfy and reminds me of the Metrolink with several floors and nice seats and lots of space. It also moves slower just like the Metrolink. The difference is that it only has two stops – the airport and the central city. It’s basically built for travelers coming in from the airport – everyone I saw on there spoke English. Getting off the CAT I was a little surprised… I expected the U-Bahn to be relatively nice… but I suppose it was under construction so it was kind of creepy walking through the tunnels trying to find where to go by myself at night. By the time I got off the U-Bahn it was already dark ~21 or 21:30. I was  little afraid because I didn’t know how safe Vienna was. The streets were a little cobblestony. There was a lot of graffiti and some shady looking people around (or rather I just thought they were shady because they smoked and were drinking and stuff). Then I went down a small alleyway to get to the hotel and I thought I was totally going to get mugged. Later I learned that Wien is actually one of the safest cities and that the graffiti isn’t because of gangs and such but more of social commentary and art movements. There’s a lot of graffiti because they don’t work to remove the graffiti, meaning that a lot it has been built up over a long period of time. 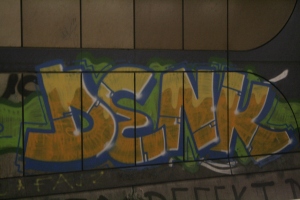 Then I checked into the hotel and went up to room 208. Soon after getting in, my roommate for the night came in! She was a little jet lagged and had been out all day so we sat and did work till she fell asleep and eventually I went to sleep 🙂 It’s fun to be with people from America again and have the same excitement of entering a new city together 🙂 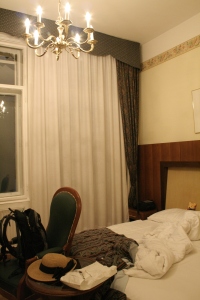