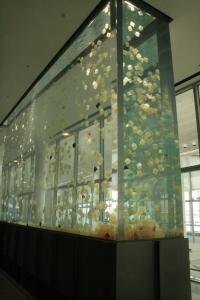 During this time I have become more aware of my photographing habits. At home I snap pictures of just about everything, sometimes too many things. I’ve realized now though that it just isn’t as fun taking pictures when there’s no one around that you know to take pictures of. I like to take pictures of people a lot of the times because that’s something that only people around them can captures. Like… buildings and monuments and such are just not as fun. After all these tourists coming and taking pictures, almost every angle has already been snatched somewhere in the world – but people are always interesting. It’s also easy to find a post card of a place or pictures that probably look even better than mine, the only difference is that I can have people I care about in those pictures – proof that they’ve been there and remembrances of what we did. It’s also not as fun because I look like a super Asian tourist with a large camera annoyingly taking pictures. I realized that if I don’t want to seem too touristy I would have to give up a lot of photo opportunities that I would have otherwise taken. I feel especially our of place and conspicuous in these areas where most (if not all) Asians are tourists and not natives.

My eating day continues onto the airplane where we were served dinner.

I’ve always relatively liked airplane food and never quite understood why people made fun of it (though I’ll comment on that later). For dinner I had chicken and rice with peas and carrots, a nice container of corn, a piece of bread, and a brownie for dessert. I ate slowly because I wasn’t quite hungry yet, but eventually finished it all… sort of like how I finished my lunch. 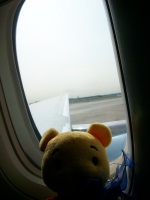 I had a nice window seat and not extremely personable neighbors. I watched Yogi Bear and Serendipity (one that I had been meaning to watch) and finished up some German reading. I also tried to sleep so that jet lag wouldn’t be so bad once I got in. But unfortunately I learned that airplane seats are very uncomfortable for sleeping and there’s a lot of turbulence on the way to Germany.

Luckily I had a good seat next to the wing so I could look out the window and watch the changing of the mechanical parts as we took off and landed. One interesting thing I noted, though Pooh’s head is covering it in this picture was that there was a small piece of metal  on the engine that almost seemed like it was just there for looks. Upon closer inspection during the time of incline I noticed that it created a small wind tunnel that added to the strength of lift under the wings. I could actually see the tunnel created. It was quite fascinating, but I didn’t get a chance to get a picture – perhaps on the way back if I’m lucky.

During the landing, I looked out the window. Frankfurt is a beautiful green! When I got off the plane, it was so fun seeing everything in German. I converted my money and got a sim card. Unfortunately the store couldn’t get the data to work on my phone… which is unfortunate because I was hoping to get around the city using the maps on my phone… fail. Hopefully I can figure it out… And then began the adventures of Audrey who has forgotten almost all of her Deutsch. I was able to get the instructions from the airport for which trains to take and then I was sent off to transfer trains and find my way.

And the story will continue. Currently it’s about time for orientation to start. Bis spӓter!

By the way… every time I try to type an umlaut I have to look it up in symbols… is there a better way?

This entry was posted on Wednesday, June 22nd, 2011 at 1:39 pm and posted in Frankfurt, Germany. You can follow any responses to this entry through the RSS 2.0 feed.
« The greatest adventure in my life thus far…
Auf Erzhausen »

One response to “Off to Frankfurt!”